Looking for a wider selection? Check out our store in-person or head to our Discogs on-line store 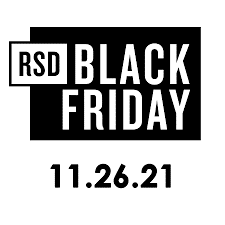 Welcome to Record Store Day Black Friday 2021! We’re excited to kick off the Christmas shopping season with some great titles you can only get on Black Friday!

Here is the mission statement of RSD Black Friday

“Since its inception, Black Friday has turned the day after Thanksgiving into the unofficial start of the holiday shopping season. Traditionally, Black Friday has been about super-cheap prices on mass-produced goods and primarily takes place in malls and big-box stores. But we really like the idea of a shopping season, especially when that shopping is all about, at its heart, a way to show the people you like that you like them. (And a way for them to show you, too. Gift-GETTING is also awesome!)

We work year-round to shine a light on the independent businesses in your local community that sells you records and other things that make you happy, make you smile, make you sing, bring you comfort, bring people together (with proper safety protocols in place, of course!). This year that has felt more important than ever, as local businesses of all kinds face unprecedented challenges, and we’ve been so happy to see how you’ve all supported them. Everything you find in a record store (or on a record store’s website) would make a great gift for someone, so in this year when the holiday season may be a little strange, but also a little special, and it may feel even better to wrap up and give a little something to someone, helping record stores be a part of that ‘shopping season’ makes more sense to us than ever.

There are artists, labels, managers, and distribution companies who feel the same, and we’ve put together a list of titles for that season that will be available at participating record
stores. They come out on Black Friday (this year 11/26) but may be available at record stores throughout the rest of the year, because record stores are the best place to go with a Holiday Wish”

Here is how it will work. Doors will open at 9 AM on Friday 11/26/21. Many people line up ahead of time, so if there’s something you’re very interested in getting you may want to plan to arrive early. It’s first-come, first-serve. No holds or online sales until the day after. All of the RSDBF releases will be on a table in front of the store. You will be able to buy the special releases out there, and also go inside and browse the store if so desired. Many people are only interested in the special releases, so they won’t be going inside. This way, the store won’t be unnecessarily crowded with people. One special release per person. Releases still remaining the next day will be unlimited. We can take cards or cash. We can’t wait to see you!

Here is the list of items we will have. There will be at least one copy of each.